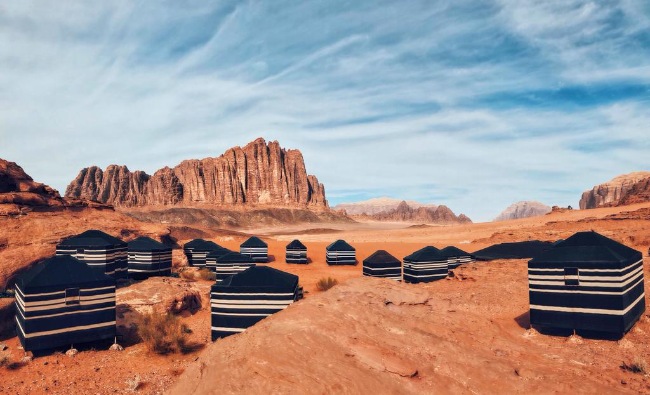 Jordan is famed as the prominent fragment of the Arabian Peninsula. Jordan is situated between the nations of Syria, Iraq, and Israel. An expedition to Jordan with your dear ones offers the golden opportunity to visit most ancient cities, gorgeous streams, lush green trees, and most pristine scenic beauty. The flank of Jordan is filled with various impressive hikes. Jordan is the paradise for photoholics with an extremely pristine landscape. The history of Jordan is as old as a thousand years back at the time of the earliest humans. There are many tourist destinations in Jordan that captivates the thirst of every globetrotter. The Dead Sea, Jerash, Amman, Al-Maghtas, Petra, Aqaba, Mujib Nature Reserve, Dana Nature Reserve, Madaba, Ajloun, Irbid, Zarqa, Shobak, Ma’an, and Wadi Rum are few among most attractive and breathtaking captivations in Jordan. Among them, Wadi Rum is something just extraordinary.

Wadi Rum is also called the ' Valley of the Moon'. Wadi Rum is located in the southern region of Jordan. A valley that is cut into granite rocks and sandstones - Here lies the Wadi Rum. It is one of the biggest wadis in Jordan. Wadi Rum is famed as one of the stunning and gorgeous deserts in the world. A plethora of visitors visit this protected wilderness in Jordan, the Wadi Rum to explore the sun-scorched and mesmerizing beauty under the deep orange rays of the Arabian sun. Once you visit this beautiful desert in southern Jordan you can behold this amazeballs natural wonder using bare eyes, It is very awe-inspiring and breathtaking.  Massive bluff rock-ribbed mountains sculpt from the rocky limestone escarpments defines the Wadi Rum.

Wadi Rum is known to be the most enchanting and intriguing place. Here’s why;

1. A Martian landscape, on Universe

Imagine yourself amidst the weathered masses of the rock formation, it is really fascinating, isn't it? The soft red sand bed that spread over miles and miles, the rocks that form the vertical wall is indeed fascinating. Because of the centuries of erosion caused by the water sources and wind each rock possesses a unique pattern. An interesting fun filling factor is that if your level of imagination is quite higher you can see the monster, animal, and human faces on the rocks. Wadi Rum is also familiar as the 'Martian landscape' because of the rock formation as well as the natural bridge that connects the formations. Wadi Rum was the shooting spot for thousands of movies.

2. Underneath the star-spangled skies

Wadi Rum is an ample destination for camps as it faces less human habitation. There is no pollution in Wadi Rum thus the sky is completely clear and it is a visual treat. Having a lovely time with your dear ones under the starry sky filled with millions of stars is an indelible experience for sure. A night campaigning in this desert offers you a wide and crystal clear view of the night sky. Must say Wadi Rum is one of the safest places for a tranquil family trip as you can walk around the deserts even at night without any fear.

Wadi Rum was inhabited at the prehistoric times and it was the most prominent portion of trading routes of ancient times. You can behold the leftover foundations of the ancient stone houses at Wadi Rum. You can also find some stone tools also. Wadi Rum and its connection with  British officer T.E Lawrence is remarkable. Jabal al-Mazmar, a rock formation in Wadi Rum, was named to 'The Seven Pillars of Wisdom' after the publication of this book in which he clearly penned the after-effects of the war. But the seven pillars described in this book have no interdependence with Wadi Rum.

If you are yearning for serenity and tranquility this place is ideal for you. Indulge in the red sand bed, unique rock formations, and the stunning sunset. Spend a serene time under the glittering sky to rejuvenate your soul, body, and mind.