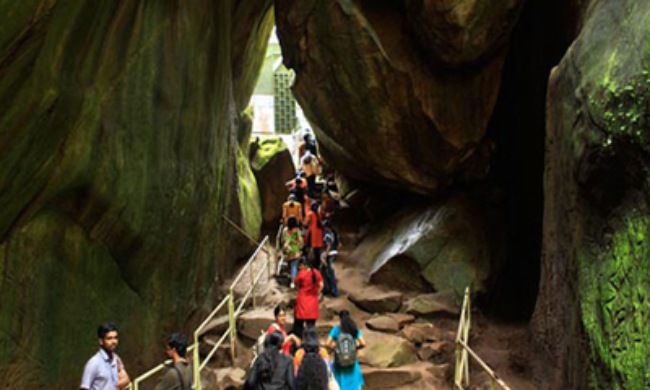 Placed at about 1200 feet above sea level, the Edakkal Caves are one of the earliest human settlements ever identified. Pictures and engravings inside the cave confirm the presence of ancient human encampments in Wayanad.
The caves were first found by then Malabar District Police Superintendent Fred Fawcett on his hunting adventure. He discovered the caves to the west of Edakkal hill, and when he traversed it further, he found that the caves were the habitat of the Neolithic people.

Despite their name, the Edakkal caves are really not caves. The cave is built up by a massive boulder stand astride of a huge crack in a large rock, forming a covered area with a length of 96 feet, a width of 22 feet, and a height of 30 feet.

The Edakkal caves are assumed to be the wild camping shelters of the Neolithic community. The cave walls comprise a collection of Neolithic stone carvings and representations. Most of the illustrations on the cave walls might belong to the late Neolithic era. So far, with the exception of Edakkal, no substantive actual proof has been found for the existence of a real Neolithic cultural identity in Kerala.

Each year, thousands of travelers visit the Edakkal cave to see its natural features and mythic status. There are several legends and stories about cave emergence. A popular one is that the caves have been created by the arrows of Kush and Luv, the children of Lord Rama and Seetha. Another mythology is that Kuttichathan and the goddess Mudiampilly created it.

The Edakkal Cave are widely known for their artworks of figures: human, animal, icon, and letter. These artworks are assumed to date back to 6000 BC. The engravings and neolithic drawings are a tribute to the life and culture of those who resided in the caves centuries ago.

Within the Edakkal cave, you can see the stone age engravings on the walls of the internal caves. The work leaves you in amazement, and the carvings are claimed to be of the Neolithic and Mesolithic centuries. You can also see Tamil and Brahmi inscriptions on the walls of several caves. A few other sections of the Edakkal Cave are petroglyphs, not caves, but a narrow fissure in rocks, or clefts. Petroglyphs have brilliant structures that are amazing to see.

It's a phenomenal experience to walk through Ambukuthi Hill to get to the Edakkal Cave. You're not only going to challenge yourself, but you are also going to pass through intriguing landscapes and incredible terrain. Check out the wonderful coffee plantations on the way to the caves at the base area of Ambukuthi Hill. You can also see the sculptures of Adam, Eve, and Satan from the Bible on the way. There is also a neat little eatery that serves delectable snacks on the way to the caves.

Edakkal is said to have connections to Indus Valley Civilization as well. Approximately 400 visible signs and symbols have recently been discovered, which have demonstrated their connection with ancient civilization.  The notable one among them is 'a man with a jar cup.'

Tickets to the cave are available in the booking office at the top of Amnukuthi Hill. The ticket price for adults is Rs. 30 and Rs. 20 for children under 12 years of age. Plastic bags, cans, and bottles are not permitted in the cave's premises. If you need to bring a bottle, you have to pay a deposit at the entry gate to the cave.

The Edakkal caves are open to visitors from 8 a.m. to 4 p.m on Tuesday to Sunday. It is not allowed to visit the caves on Mondays. As a cultural landmark, you definitely want to visit for its amazing paintings and sculptures. The simplest way to get to the caves is by trekking.⠀ If you enjoy exploring nature and adventure activities, you will truly appreciate the experience of discovering the caves of Edakkal. It's a terrific trek and a perfect way to get in touch with nature.

Edakkal Cave is located 50 kilometers from Mananthavady, 26 kilometers from Kalpetta, and 13 kilometers from Sultan Bathery. You could hit the bottom part of the hills of Ambukutty by car or bus, and from there you have to take a trek to the hills. You ride in jeeps arranged by the DTPC until the middle of the hills. Book your Wayanad Tour package online with Seasonz India Holidays and get some exciting deals and deals.

Top 10 surprises to sprinkle on your Kerala Honeymoon Package

Kerala is a tiny paradise for every honeymooner... Read more...

Gardens by the Bay