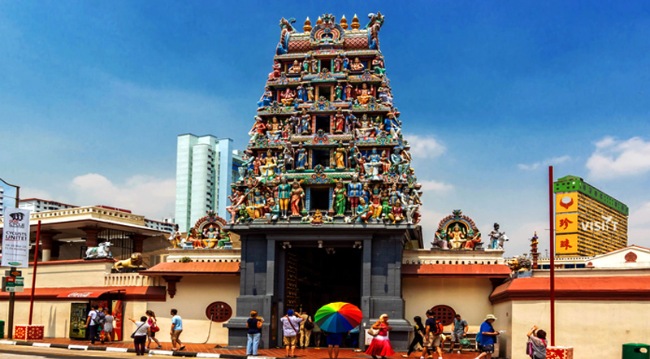 Ooty is a pristine location with plenty of tea estates, tribal villages, and scenic tourist spots. The city has immense devotional presence, on a trip to Ooty, visit the popular devotional destinations on the go. Mariamman temple is a popular Hindu-based devotional destination in Ooty. This temple is dedicated to the Hindu Goddess of Rain located in the Ooty town. It’s next to the market area and the mother goddess is considered to be a form of goddess Kali. Mariamman is also referred as Mahamayi or Seethala Gowri by the local residents.

History of Mariaman temple in Ooty : According to the history, an incident narrated the formation of temple. Every Tuesday merchants from Coimbatore reach Ooty to trade with the local tribals. One day, two sisters travelled from the north and reached the market. The sisters had a divine look, they asked for a place to stay, traders asked them to stay under a nearby tree. People were unaware of the fact that they were goddess. Suddenly, a lightning flash of light appeared nearby the tree and sisters disappeared. People realized that the sisters were divine and finally, built a temple for the Goddess Mariamman and Kaliamman together. Even today, people gather at the temple on the way returning from market.

Mariamman temple festival in Ooty : Mariamman temple festival takes place during the month of February. It’s a 28 days long celebration where Mother Aadhi Parashakti comes as a procession in different forms like Rajarajeswari, Parvathi, Durga, Kamakshi, Meenakshi, and Bhagvathi. The temple and premises is completely filled with huge crowd during the festival. During the car procession, people throw salt on the deity, hoping that their hardships would go off as salt disappears in water.

The temple has unpredictable crowd during the new moon days, Navaratri days during the September-October month, Fridays in the aadi month i.e. July to August, and other significant events.

The festival includes an important event, where devotees walk barefoot over the burning coal to show their respect to their Goddess. People also indulge in making oil lamps from grounded rice as simple offerings to their Goddess.

People infected by small-pox, handicapped, impaired vision, or any other illness pray to the Goddess Mariamman. Devotees also seek blessings for their marriage and child. After realizing their wishes, devotees offer a chicken and black sari to the goddess as a form of thanks-giving.

There are devotees who avail a special thread called Mudikayiru, prepared by enchanting mantras. It’s popular thread that is believed to protect devotee from illness, evil looks, magic spells, and lot more.

The temple remains open for devotees from 6am to 11pm in the morning and 4pm to 7pm in the evenings.

The temple is located just 1.5km away from the city. It’s just 1km from the Ooty bus stand and railway station. Visitors can opt for bus service or cabs to reach the temple. If you wish to explore the town, get ready for a simple walk through the bustling Ooty market.

Relish the Vibrant Atmosphere of Kuta

Top 7 Places to Visit in Kerala during Summer Season